Memes - More than just a giggle

Hear the word "meme" and you might think of Condescending Wonka, Success Kid, Evil Kermit, or the Woman Yelling at Cat. These often humorous, widely shared and widely recognizable images have come to dominate the internet in recent years. And it makes sense. Memes convey small nuggets of information usually intended to make you laugh and share, thus contributing to their ubiquity. As a result, social media meme accounts have cropped up everywhere. Some are even dedicated to niche interests or specific groups of people. For example, as an alumna of Boston University, I am a proud member of the Facebook Group "BU Memes for Normy Teens", a group that shares memes that often mock life at the university. 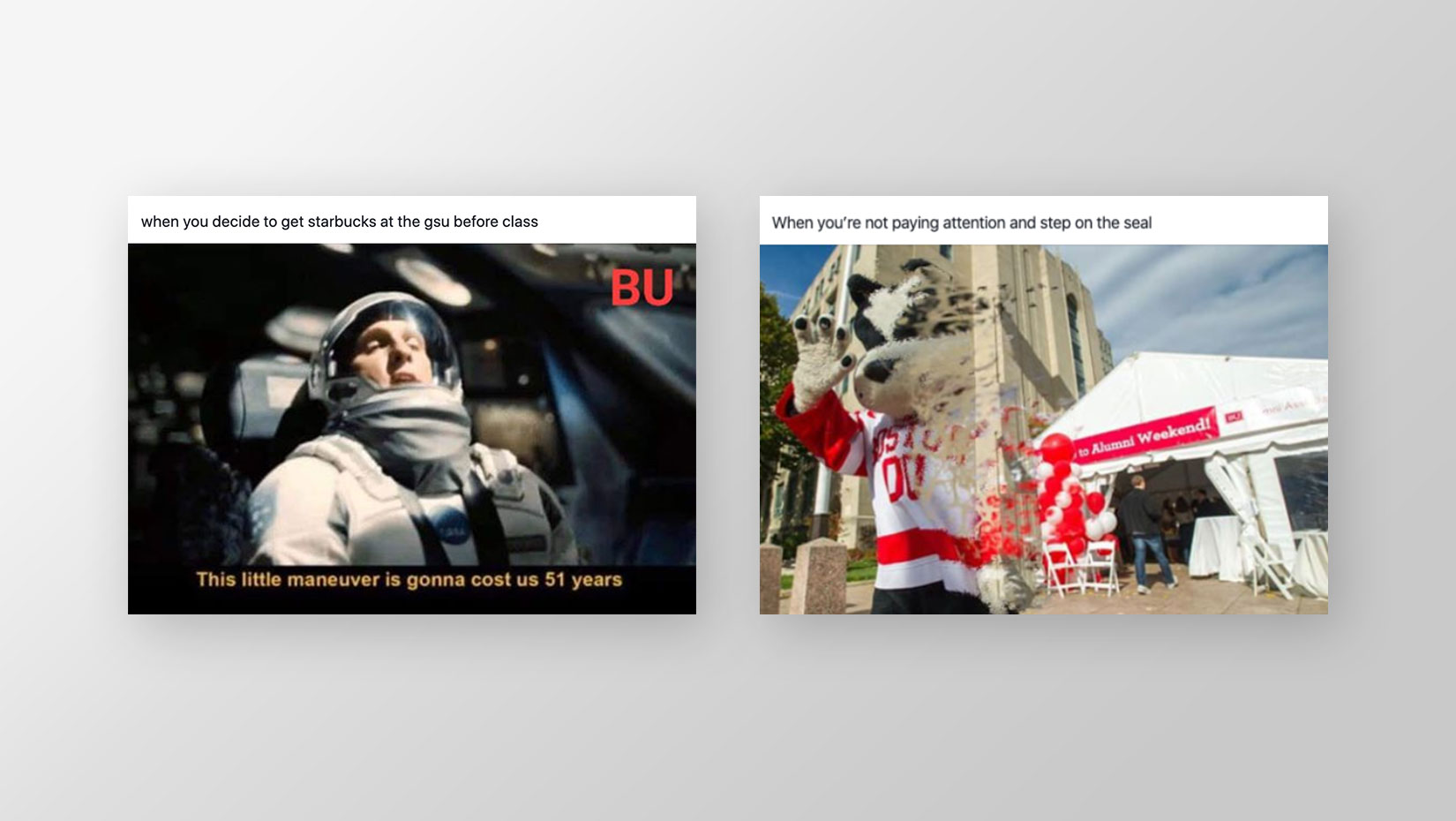 (There is a longstanding legend that if you step on the BU Seal, located in the center of Marsh Plaza on the Charles River campus, you won't graduate in four years.)

Chances are, if you have an interest or belong to a specific group of people, there's probably a meme page dedicated to it.

As a loud and proud Gen Z, memes are a large part of what I send my friends online. But the potential of memes extends beyond supplying a giggle or two. In fact, memes can be a really powerful marketing tool.

Take, for instance, this meme from Netflix's comedy channel instagram @netflixisajoke. It is a feeling all too familiar--22 and still sitting at the kids' table on holidays. But it's a small, digestible piece of comedy, conveys a relatable feeling, and helps build Netflix's image as a young and hip, "with it" company while simultaneously promoting a television show you can stream on their platform-- as if there was any doubt that Netflix was an active participant of online culture. Regardless, memes are a great way to increase engagement because of how easily shared they are.

Memes are also revolutionizing the way consumers think about brands. In his research paper, "Memes and Advertising," Freddie Dickerson explains, "Advertising is no longer a hierarchy, in which the message of the brand is the final say in their image, coming down from those in charge of brand image to the consumer." Instead, he says, "Because of the rapid amount of sharing, businesses are looking at memes as a way of creating a type of dialogue between the company and the user."

A perfect example of this conversation between brand and consumer is highlighted (pun absolutely intended) by Rihanna's cosmetic company Fenty Beauty. Dayo, in her article Fenty Beauty: How One Makeup Brand's Social Media Game Revolutionised a Whole Industry, explains, "By using meme culture to its advantage, it has managed to create engagement like never before. Fenty has turned trends into promotional content and along the way created an environment where customers feel like they're just having a conversation with a friend." 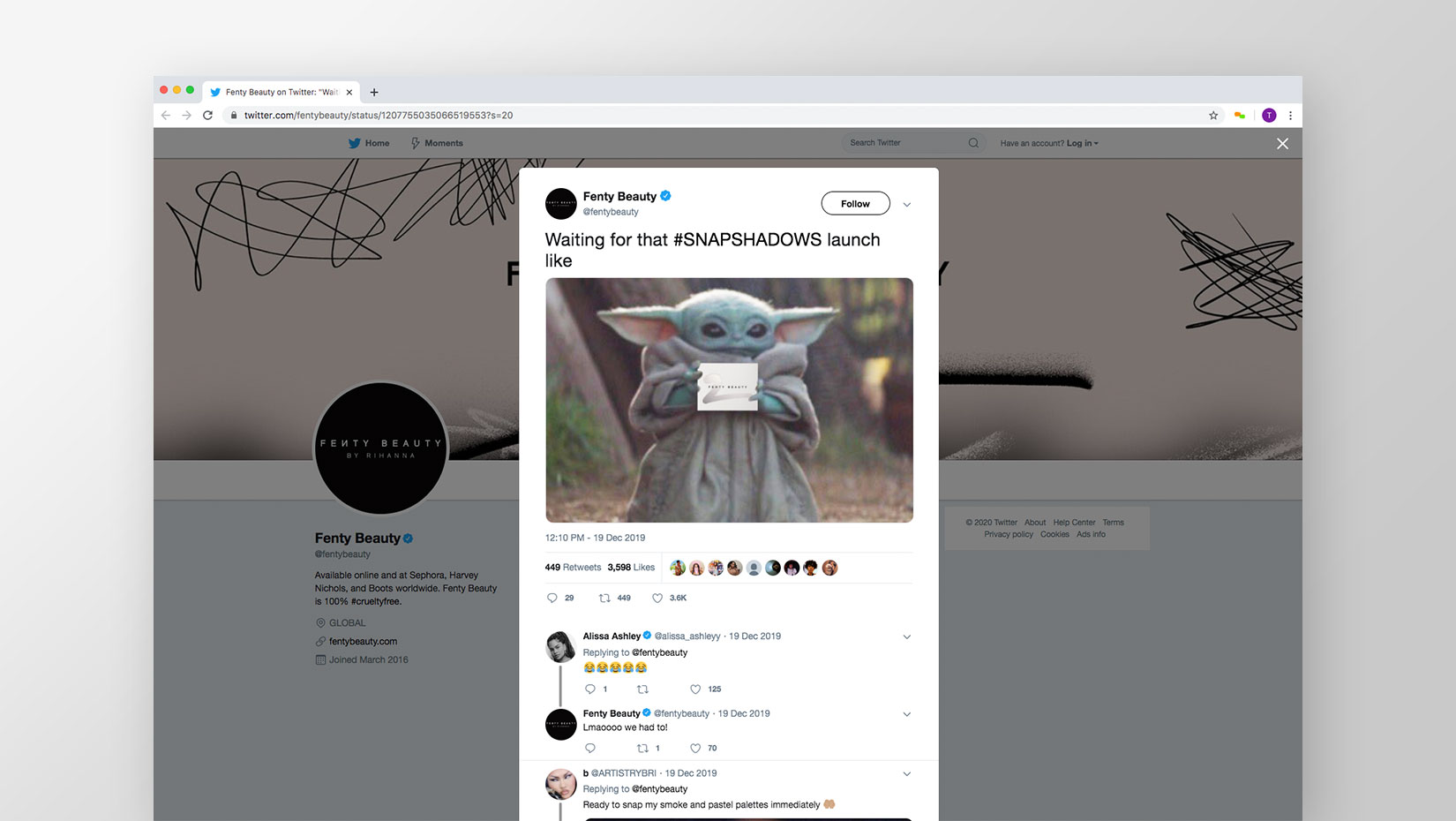 Julia Kirby, a writer at the Harvard Business Review, argues that the power of memes is that they get the message across quickly. "If you focus on maximizing engagement, you'll realize that the ideal time commitment to be asked of the crowd measures in minutes. If you expect people to spend hours on beautifully rendered creative, you've set the bar too high, because 99% of the public lacks the time and confidence to engage at all." For this reason, it is the meme's bite-sized nature that makes it so powerful.

Part of the beauty of memes is their adaptability. Any image can be updated with a caption unique to a specific scenario. Yet, before you start using memes to promote your business, it is crucial to know your audience. Memes typically target a younger audience who are active consumers of online culture and aware of the circulating trends. Does it make sense for your brand to be creating memes to increase engagement? Or does your brand use a more serious tone? What demographic are you targeting? Would your ideal client or customer understand your meme if you created one? These questions are critical to weigh before setting out on your meme creation.

However, if memes do work for your audience, they can be used to create a sense of connection between consumer and brand. Instead of putting out a run-of-the-mill advertisement online that most people will easily breeze over, creating a meme is a unique way of getting a message across.