Marketing Successes and Suckers of 2019

In the marketing and advertising world, it can be hard to keep track of what's trash and what's treasure. One second, the latest tone-deaf ad is being roasted by everyone on Twitter, and the next, another brand is being lauded for a successfully and meaningfully executed cause-marketing campaign. And with estimates of consumers being exposed to about 5,000 ads per day, it's nearly impossible to recall specific ads a few months after the fact.

2019 saw a broad array of advertisements, ranging from complete flops to ads that commented on our culture in a way that was authentic and real. To be a truly effective marketing agency, it's important to keep your finger on the pulse of how certain campaigns are perceived in order to learn how to incorporate certain tactics while avoiding others like the plague. We made it easy and have recapped the top successes and suckers of 2019 to jog your memory:

Although it's a brand that has traditionally been focused on TV advertising, Popeyes switched up its usual game plan by taking to Twitter ahead of the launch of its chicken sandwich. The result? It went viral, trending globally on Twitter and running out of the sandwich across the country.

Unlike brands like Wendy's and Taco Bell, Popeyes wasn't previously known for being sassy, but something as simple as "...y'all good?" made people take notice and appreciate the brand for its quip. A risky move in terms of clapping back at a competitor, but one that certainly paid off. Tweets about the Popeyes brand rose to about 4,000 a day in the first week after the sandwich's launch on August 12. Looks like a little well-placed sass can go a long way in differentiating a brand in the food industry's Twittersphere.

What do Steve Carrell, Cardi B, and Lil Jon all have in common? They were all part of Pepsi's Super Bowl commercial that plays on the classic Coke vs. Pepsi debate, which told the story that Pepsi is more than ok. The ad, along with social posts that were shared by celebrity influencers, catapulted the hashtag #PepsiMoreThanOK on the day it was aired. This was also done in parallel with a related sweepstakes, where every time viewers heard the word "ok" during the game and commercials, they were encouraged to share the hashtag #PepsiSweepstakesOK to win prizes.

Pepsi's use of television with paid and organic social media captured great engagement during a program known for top-tier ads, and the #PepsiMoreThanOK and #PepsiSweepstakesOK received a combined total of 76.4K mentions and 480.8K engagements. And personally, a commercial that stars Steve Carrell alongside Cardi B is something I can absolutely get behind. Okurrr?

In 2018, CVS created The Beauty Mark, which is a stamp that appears on photos in CVS stores where the models have not been thinned, smoothed, or digitally altered. This was taken to the next level in January 2019 with an event in Times Square that featured the likes of Ashley Graham and Kerry Washington, Revlon and Neutrogena brand ambassadors, respectively. The event was a way to give a first look at its updated beauty aisles and to raise awareness of how important it is to use more authentic messaging and imagery.

The campaign racked up about 1,700 earned media placements and boosted public opinion of the brand: 80% of consumers had a more positive impression of the brand's beauty business after hearing about the social media campaign, and the campaign had 0% negative sentiment on social media. No small feat in an age where every move is scrutinized, and a great example of what a well-executed long-term campaign can do for your business.

Premiered during the Oscars in February 2019, Nike's latest addition to its "Dream Crazy" campaign took a feminist stance and flipped the adjectives that women are typically described with on their heads. Serena Williams was the voiceover on the ad, detailing how female athletes should embrace their "crazy" and show how strong they are.

Admittedly, I got chills the first time I saw it, and based on the positive response the video received, it appears I wasn't alone. According to Tubular Insights, four months after its initial release, the Twitter version of the ad received 31.6M total views and 655K engagements, the Instagram version claims the highest 30-day view count at 19M, and the Facebook clip has 21.5M views. As it was released right before International Women's Day, the timing couldn't have been better and the sentiment came across as authentic.

Ryan Reynold's snarkiness is part of his charm, so it's nice to see his Aviation Gin brand has adopted the same tone in its latest and greatest ad. After widespread criticism of Peloton's holiday ad (see #1 on the list of 2019 suckers), Aviation Gin quickly turned around an ad that shows the same actress from Peloton's commercial drinking Aviation Gin in a bar with her friends, clearly dazed. The Peloton character tells her friends that the gin is smooth, and one of her friends tells her that she's "safe here" before they toast to new beginnings. Reynolds tweeted the video December 6th with the caption, "Exercise bike not included. #AviationGin."

It's timely, funny, and brilliant. Capitalizing on the commercial everyone has been loving to hate, Aviation Gin's ad received 9.4 million views on Twitter and 4 million views on YouTube as of December 9th - just three days after it was released. By taking part in the conversation early on and humorously piggybacking off of Peloton's narrative, Ryan Reynolds set Aviation Gin up for a viral success.

Peloton comes off as sexist in its latest holiday commercial

This is definitely one of those ads that got ridiculed by a group chat with my friends. Not only does the story not really make sense (why does someone who looks like a fitness model look so scared to be on a stationary bike?), but many viewed it as sexist since it was seen as a man asking his already thin wife to exercise.

According to the Wall Street Journal, Peloton shares fell 15% in the three days after it was released, erasing nearly $1.6 billion in market value. This is a short-term impact that will likely resolve itself soon, but definitely not a good look. A Sprinklr study also shared that 73% of social media mentions of the ad during the two weeks after it was released had a negative sentiment. Similar to the Chase tweet, in the age of social media, it's beyond important to think about whether your ad could be offensive in any way. Twitter is sure to check you if you don't check yourself.

In a tweet that tried (and failed) to humorously spur people to be more fiscally responsible, Chase swiftly received public backlash when it said that people should stop going out to eat, buying coffee, and taking cabs to improve their bank balances. While this seems like it's targeted toward the "stereotypical millennial", people viewed it as being callous and apathetic to those who have low bank balances for valid reasons (e.g., unemployment, low wages, unexpected emergencies, etc.).

Me: Why is my balance so low?
Bank: Here's another $12 monthly fee because you don't have direct deposit
Me: My job doesn't offer direct deposit
Bank: Oh well, now here's a snarky tweet to help you save money...
Me: Time to close my Chase bank account#MondayMotivation pic.twitter.com/RQCbuKXRud

In a 24-hour period, Chase was the subject of more than 3,000 critical mentions from influential figures like Elizabeth Warren and others who said they would now close their Chase accounts. Chase quickly deleted the tweet and said that they would be more sensitive in the future, but it just goes to show that you need to think of how your message will play to a broad audience. Twitter may have a 280-character limit, but there's a whole lot of room where you can sabotage your brand in an instant.

What better way to promote gender equality on International Women's Day than to reinforce traditional stereotypes?? Miele, an appliance manufacturer, shared a picture of four women crowded around a basket of rose petals on top of a washing machine. The caption reads, "May all women always remember to embrace what makes them unique! Happy International Women's Day!" 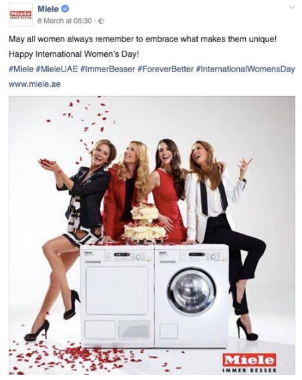 I suppose it would definitely be unique to throw rose petals around while doing laundry, but not so sure who in their right mind thought this ad was a good idea. Miele realized this after receiving backlash and deleted the Facebook post a few hours later. Main lesson here: don't reinforce outdated stereotypes and know your audience.

I was truly shocked when I saw this one… Snapchat ran an ad for a game called "Would You Rather," with the prompt saying, "Would you rather slap Rihanna or punch Chris Brown?" Considering this is a reference to Brown assaulting Rihanna in 2009, the fact that this ad ran on any app, let alone a major one, is shocking. Snapchat got blowback from Rihanna herself, who called them out on Instagram for shaming domestic violence victims.

It's no surprise that Snapchat lost $800 million off its share price after running it, and this serves as a major lesson for apps and websites to always check the ads that are running on their platforms. You don't want to find yourself getting lumped together with an offensive ad, costing you not only money, but your reputation and brand followers.

All in all, there were major wins and fails this year that catapulted some brands to the top, while plummeting others to the bottom. The main takeaway is that social and cultural movements play a huge role in advertising - if you utilize them authentically, it can be a recipe for success. If not, then you might just find yourself in the "Suckers" category for next year's list.